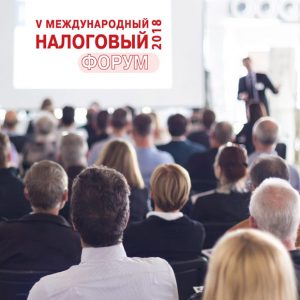 The partner of Finance Business Service Yuri Krasilnikov and tax disputes specialist Rolan Bondarets attended the V International Tax Forum, which took place on April 13, 2018. In this blog, we will tell how the event was held, what issues were most actively discussed by the participants, what points were voiced by the speakers, as well as share our own thoughts. The speakers were the representatives of business, representatives of the legislative, executive and judicial branches, as well as the specialists in the field of taxation. Many interesting and topical issues for Ukraine were discussed within the Forum.

At the beginning of the event, Algirdas Shemeta – the business ombudsman in Ukraine – recalled the reasons that led to the appearance of the BEPS (Base Erosion and Profit Shifting) plan and its essence. “Overoffshorization” of the world business became the catalyst of the world economic crisis of 2008-2009. This prompted the OECD to identify the main causes of the crisis, as well as to discover and develop the methods for its prevention in the future. In fact, BEPS has emerged as a protective mechanism to prevent tax evasion, which essence is that companies must be taxed where they actually operate, rather than transferring taxable objects to those states and territories that allow to avoid or minimize it. That is, the construction of holdings and business models should not have a single goal to receive tax benefits.

It’s no secret that it is very difficult for business in Ukraine to gain access to money for development. That is why the issues of appearance of “tax on the withdrawn capital” in Ukraine turned into a rather lively discussion which should replace the “profit tax”. The essence of the “tax on the withdrawn capital” is that until the profit received by the enterprise is not withdrawn from business, it is not taxed. Therefore, the enterprise is able to invest these funds in its own development. And, as one participant of the Forum rightly pointed out, this law concerns not so much taxes as business opportunities. Yes, indeed, the introduction of this tax instead of the profit tax contains certain risks and a burden on the country’s budget. But it should be born in mind that such a significant change in the taxation system is not designed for immediate benefits, but for long-term and targeted development of the business and economy of the state as a whole. At the same time, Ukraine is not an innovator of the introduction of such a tax, because it is already applied in Estonia, Latvia and Georgia.

State bodies refer to the fact that the introduction of the “tax on the withdrawn capital” will entail non-payment of about 30-50 billion UAH to the budget, that is, it will be necessary to seek compensators for additional revenues to the budget, thus hinting at the introduction of additional taxes or an increase in the base rates of already existing. In this regard, you can see that compensators can act not only as additional sources of revenue to the budget, but also reduce costs from it. In particular, it is known that the staff of the officials at all levels has been unjustifiably expanded and the budget expenditures for its maintenance are unreasonably high. Why not reduce the expenses in this part and not allow the business to develop and strengthen the economy of the country!? By the way, many countries have chosen this way.

During the speech, much attention was paid to the fact that it was proposed to introduce such a concept in the bills that were currently available as “transactions equated to transactions with the withdrawal of capital”. In particular, they want to include such operations:

Despite the fact that the introduction of the “tax on the withdrawn capital” should become a very strong push for business development, the talks about it remain only talks in Ukraine for several years. However, optimistic participants of the Forum believe that this law will be adopted in the near future and it will start working in 2019. Hrihol Katamadze – the President of the Association of Taxpayers of Ukraine – noted that there have been almost no radical changes in recent years in Ukraine to simplify business. He rightly noted that such a number of changes in tax legislation, as in Ukraine, does not take place in other countries. And this does not benefit either Ukraine or the taxpayers. As practice shows, in the countries where the tax legislation is unstable and unpredictable, attracting investment almost does not happen. After all, investors can not afford to bear unjustified risks associated with such sharp and chaotic changes in the laws.

In order to correct the situation, according to the conviction of Forum participants, the law “on the withdrawn capital” should be adopted. In addition, it will not be superfluous to join the global trends in taxation. So, the unification of the tax rules is an urgent need, as well as introduction of moratorium on amending the tax legislation for at least three years. “Zero declaration” and “tax amnesty” were separate issues of the Forum. The opinions of the participants of the event were divided on this occasion. Some argued that a complete “tax amnesty” should occur by declaring all the property (including money) and guaranteeing the state not to use administrative and criminal responsibility. Others stated fairly and reasonably that “zero declaration” and “tax amnesty” can not be applied to the deputies and state officials.

There was also an issue whether this should be a “zero declaration”, or some minimum fixed tax rate should be applied. In this regard, examples of the states were given that had already passed through this. It will be fair to note that in each country that have passed through the “zero declaration”, the results have not been the same, as well as the expected economic effect. Therefore, it is necessary to approach the issue of “zero declaration” and “tax amnesty” very carefully, in order, on the one hand, not to legalize property and funds that have been acquired knowingly by criminal means, and on the other hand, to restore people’s trust in the state taxation institution by turning attention to its importance and necessity.

The bills on the establishment of this body have been seriously criticized. Indeed, it is surprising to grant such authority the right to send any requests regarding the natural persons and legal entities without opening criminal procedures, the right to collect biometric data, access to voters’ lists. Therefore, it seems that the authors of the draft laws do not fully understand what is the analytical work of the body which carries out investigations of economic crimes. The participants of the event expressed their fears that the newly created body would be the same tax police, but with greater powers, which in turn could lead to abuse of the workers’ rights and violations of taxpayers’ rights.

A certain part of the Forum was devoted to the issue of tax consulting. On this issue, a parallel was drawn between the countries in which the established practice of tax legislation operates and Ukraine. Unfortunately, at this stage of development, our country loses significantly in the matters of both tax consulting and tax planning. Attention was paid to the fact that when planning business, tax advisors of the countries with well-established practice of tax legislation can develop business plans for up to 6 months, but this scheme will operate without changes for many years. It is still impossible in Ukraine unfortunately, because annual (and sometimes more often) changes in tax legislation do not allow such plans to be implemented. Such sort of simple and settled issue of obtaining individual tax advice was being discussed at the same session of the Forum. But as practice shows, tax authorities treat such requests of taxpayers quite formally. And in the event when certain formal deficiencies are found in the request for an individual tax consultation, the supervisory authorities consider them within the framework of citizens’ appeal and provide a response that is not an individual tax advice. The consequence of this is the deprivation of the ability to refer to such a response as to the official position of the supervisory authority regarding a particular situation in the event of a possible tax dispute. We would like to note that individual tax advice must be registered in the relevant register, which is placed on the official site of the SFS.

Taking into account such a rapid and unpredictable change in tax legislation, it is logical that litigation between business and the supervisory authority not only decrease, but gain more and more momentum. According to statistics, at the end of March 2018, 42% of all cases are tax disputes in the Supreme Court, and according to some reports, the supervisory authority lose more than 70% of all litigation. In this regard, business still has hope that the Supreme Court will unify the judicial practice on tax disputes, will depart from those shameful and unreasonable positions of the Supreme Court of Ukraine, which put taxpayers in dependence on the lawful / unlawful behavior of their counterparts, and, finally, will take measures to restore trust in justice.